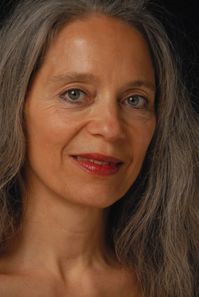 NIDHI RICE was born in Denmark.
​With an extensive background in Jungian Depth Psychology, she graduated from the Royal Danish Theatre Academy and worked for many years on Danish stage, film and Television.

Supported by grants honoring her achievements as an actress she traveled widely, deepening her knowledge and experience of the human psyche and its expression. She studied at the Stanislavski Academy and was involved in the spiritual performance work of Grotowski in Europe, as well as working with leading healers, artists and theater personalities all over the world.

Her search for deep inner connection and understanding initiated a decade long involvement in the work of Wilhelm Reich,  Perls and other pioneers, which in the mid seventies led her first to Esalen institute in California, where she lived for awhile before going to India, where she met her spiritual teacher Osho and remained in his ashram for many years.

During the last decades she has continued her exploration through a wide variety of healing modalities including somatic experiencing, sound, body and vocal expression, inquiry and subtle energy work.

With sensitivity and intuition she shares the gifts and tools she has gained through her personal immersion in meditation, human growth therapies, creative arts, and deep self-exploration. She taught at College of Marin in California for 10 years and has offered individual work, workshops and trainings in creativity, drama and self-expression for healing and transformation, along with performing, singing and directing, in Europe, Asia and the US for the last 30 years.

Now her work, both for herself and others, is mainly focused on integrated emotional and embodied awakening through creative self-inquiry and fully allowing our energetic flow and expression.